[1]     It’s never too late to make changes to prevent diseases
that may end your flying career. And becoming healthier
doesn’t mean you have to make major changes. Here are
some tips on what you can do today to keep yourself in the
[5] air for years to come.
- take the stairs instead of riding the elevator;
- limit red meat;
- consume more vegetables;
- wear UV-blocking sunglasses;
[10]    - walk more;
- try a yoga class;
- don’t smoke;
- drink a lot of water;
- find an activity that you love after retirement.
Fonte:http://goo.gl/W3uCrU Acess 30/05/2017

Read the text in order to answer question.

How to fix inequality 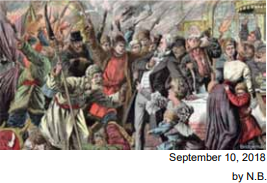 In an age of widening inequality, the Stanford professor Walter Scheidel believes he has cracked the code on how to overcome it in his book “The Great Leveler”. The Economist’s Open Future initiative asked Mr Scheidel to reply to a number of questions.

1. The Economist: Is society incapable of tackling income inequality peacefully?

Walter Scheidel: No, but history shows that there are limits. There is a big difference between maintaining existing arrangements that successfully check inequality — Scandinavia is a good example — and significantly reducing it. The latter requires real change and that is always much harder to do: think of America or Britain, not to mention Brazil, China or India. The modern welfare state does a reasonably good job of compensating for inequality before taxes and transfers. However, for more substantial levelling to occur, the established order needs to be shaken up: the greater the shock to the system, the easier it becomes to reduce privilege at the top.

2. The Economist: Are we really living in an implacable period of wealth inequality — or was the relatively equal society that followed the Second World War the real aberration?

Walter Scheidel: When we view history over the long run, we can see that this experience was certainly a novelty. We now know that modernisation as such does not reliably reduce inequality. Many things had to come together to make this happen, such as very high income and estate taxes, strong labour unions, and intrusive regulations and controls. Since the 1980s, liberalisation and globalisation have allowed inequality to rise again. Even so, wealth concentration in Europe is nowhere near as high as it was a century ago. Like Europe, America, meanwhile, is getting there — which shows that it all depends on where you look.

3. The Economist: How do artificial intelligence and automation fit in to your thinking? Will they be a calamity for employment and thus for equality? Or might they unleash extraordinary productivity and improvements in living standards that actually narrow inequality?

Walter Scheidel: Ideally, we would like education to keep up with technological change to make sure workers have the skills they need to face this challenge. But in practice, there will always be losers, and even basic-income schemes can take us only so far. At the end of the day, someone owns the robots. As long as the capitalist world system is in place, it is hard to see how even huge productivity gains from greater automation would benefit society evenly instead of funnelling even more income and wealth to those who are in the best position to pocket these gains.

In the excerpt from Walter Scheidel’s first answer “The latter requires real change”, the expression in bold refers to

It doesn’t interest me what you do for a living, I want to know what you ache for, and if you dare to dream of meeting your heart’s longing.

It doesn’t interest me how old you are. I want to know if you will risk looking like a fool for love, for your dreams, for the adventure of being alive.

It doesn´t interest me to know where you live or how much money you have. I want to know if you can get up after a night of grief and despair, weary and bruised to the bone, and do what needs to be done for the children. It doesn´t matter to me who you are, how you came to be here. I want to know if you will stand in the center of the fire with me and not shrink back.

It doesn´t interest me where or what or with whom you have studied. I want to know what sustains you from the inside when all else falls away. I want to know if you can be alone with yourself; and if you truly like the company you keep in the empty moments.

(By Oriah Mountain Dreamer from the book THE INVITATION (c) 1999. Published by HarperONE, San Francisco. All rights reserved. Presented with permission of the author. www.oriah.org) (theunboundedspirit.com/start-living) Accessed on March 27th, 2018.

According to the meaning of the text, the underlined words are consecutively: 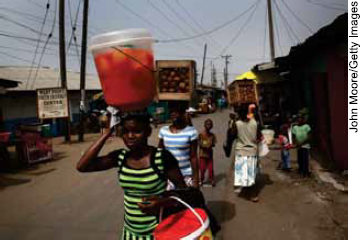 Women walk with their wares through the West Point slum on February 9, 2016 in Monrovia, Liberia. West Point, the most impoverished and overpopulated community in Liberia, was hard hit by the Ebola outbreak, and health facilities at the time were overwhelmed. After almost two years, on January 14, 2016 the World Health Organization declared the epidemic over, after the virus had killed some 11,300 people and infected more than 28,500 people in West Africa.

The study, which was published in Methods in Ecology and Evolution, is described as “a major improvement in our understanding of the spread of diseases from animals to humans,” and the researchers said that the study could help governments prepare and respond to outbreaks, as well as consider the environmental risks when making policies. “Our model can help decision-makers assess the likely impact (on zoonotic disease) of any interventions or change in national or international government policies, such as conversion of grasslands to agricultural lands,” Kate Jones, professor at the University College London’s genetics, evolution and environment department and co-author of the study, said in a press release. According to the study, more than 60 percent of emerging infectious diseases are zoonotic by nature, and that aside from Zika and Ebola, other highly infectious diseases such as Rift Valley fever and Lassa fever are predicted to spread with changing environmental factors.

Researchers tested the new model with the Lassa fever epidemic in West Africa, which was caused by the Lassa virus from rats. The team used the locations of 408 known Lassa fever outbreaks in West Africa between 1967 and 2012 and the changes in land use and crop yields, temperature and rainfall, behavior and access to healthcare.

To track the virus’ location against ecological factors, the researchers also identified the sub-species of the multimammate rat (Mastomys natalensis) responsible for transmitting the virus. With these information, the model predicts that the number of people infected by the disease will double from 195,125 to 406,725 by 2070.

“Our new approach successfully predicts outbreaks of individual diseases by pairing the changes in the host’s distribution as the environment changes with the mechanics of how that disease spreads from animals to people, which hasn’t been done before,” Dr. David Redding of UCL and co-author of the study said in the press release. “It allows us to calculate how often people are likely to come into contact with disease-carrying animals and their risk of the virus spilling over. Alongside population increases, the expected future changes to climatic patterns will drive an expansion of the areas of West Africa considered high risk, especially the western most regions around Senegal and Guinea, the coastline of Cote d’Ivoire and Ghana, and in Central Nigeria,” Redding added. According to the researchers, the model could be refined to include the impact of travel infrastructure, human-to-human contact rates and poverty.

No trecho do segundo parágrafo “Our model can help decision-makers assess the likely impact (on zoonotic disease) of any interventions or change in national or international government policies, such as conversion of grasslands to agricultural lands”, a expressão em destaque exprime ideia de

Polar bears will be protected in Alaska 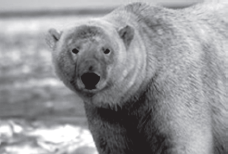 The US government says land that oil and gas

companies want to drill in Alaska is a crucial home for

will help save the endangered animals.

is giving birth to cubs, or is about to. But the very survival

of this fearsome, majestic species concerns many

Polar bears live and hunt on sea ice, but the frozen

[10] Arctic Ocean is melting at an increasing rate, a result,

Now the US government has designated nearly

[15] bear. It covers an area of roughly twice the size of the

United Kingdom, and it means any proposed economic

activity there, must be weighed against its impact on

the bears’ habitat. It includes some of the Chukchi and

but it adds extra obstacles that opponents say will harm

the economy. Environmentalists welcome the move,

saying now they can write a recovery plan for polar bears,

[1]   As a recent report from the Codex Group showed, looking around bookstores is still a far more common way of finding new books than either online search or social media. In fact, independent bookstores are now thriving, thanks in large part to their close ties to both publishers and customers. “Stores that can help you not just find what you’re looking for but also help you discover books you haven’t heard of are still very valuable to readers,” says Daniel Raff, a management professor at Wharton.

[2]   Of course, a lot of people believe that physical books are “technologically obsolete,” and that the book industry is heading down the path that the music industry took, where digital downloads decimated CD sales and put record stores out of business. It’s true that, between 2009 and 2011, ebook sales rose at triple-digit annual rates. But last year, according to industry trade groups, e-book sales rose just forty-four per cent. (They currently account for about a fifth of the total market.) This kind of deceleration in the growth rate isn’t what you’d expect if e-books were going to replace printed books anytime soon. In a recent survey by the Codex Group, ninety-seven per cent of people who read e-books said that they were still loyal to print, and only three per cent of frequent book buyers read only digital.

[3]  E-books obviously have certain advantages (like the fact that you can carry lots of them around with you), but for many book buyers their main appeal is that they’re cheaper. Against that, the Codex Group finds that people of all ages still prefer print for serious reading; e-book sales are dominated by genre fiction—“light reading.” This may be just a prejudice that will vanish as e-books become more common. But we do read things differently when they’re on a page rather than on a screen. A study this year found that people reading on a screen tended to skip around more and read less intensively, and plenty of research confirms that people tend to comprehend less of what they read on a screen. The differences are small, but they may explain the persistent appeal of paper. Indeed, hardcover book sales rose last year by a hundred million dollars.

[4]  For many people, as a number of studies show, reading is a genuinely tactile experience—how a book feels and looks has a material impact on how we feel about reading. This isn’t necessarily traditionalism or nostalgia. The truth is that the book is an exceptionally good piece of technology— easy to read, portable, durable, and inexpensive. Unlike the phase-change move toward digital that we saw in music, the transition to e-books is going to be slow; coexistence is more likely than conquest. The book isn’t obsolete.

In paragraph 3, “This” in the sentence “This may be just a prejudice that will vanish as e-books become more common” most likely refers to which of the following?