Plastic straws, cotton buds and drink stirrers to be banned in England 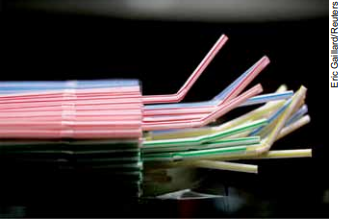 Plastic straws and drink stirrers, and cotton buds with plastic stems will be banned from sale and use in England from next April, the government has confirmed. The move, which has been in the offing for more than a year, is hoped to vastly reduce the litter and other environmental impacts of the nearly 5 billion plastic straws currently used each year in England, along with more than 300 million plastic stirrers and close to 2 billion cotton buds with plastic stems.

Huge numbers of these items, particularly cotton buds, are flushed down toilets or otherwise end up in litter – surveys have recently found waterways across the UK full of plastic, putting wildlife at risk.

Alternatives are available, including serving drinks without straws or stirrers, which is preferable, or using paper straws and biodegradable products in place of plastic stirrers and cotton buds. The only exceptions to the new rule will be for people with a medical need or disability, for whom plastic straws and other materials will be available upon request.

No trecho do segundo parágrafo “Huge numbers of these items”, a expressão sublinhada refere-se a:

VEGAN VS VEGETARIAN – WHAT’S THE DIFFERENCE?

Vegetarian diets have reportedly been around since as early as 700 B.C. Several types exist and individuals may practice them for a variety of reasons, including health, ethics, environmentalism and religion. Vegan diets are a little more recent, but are getting a good amount of press.

What is a vegetarian diet?

According to the Vegetarian Society, a vegetarian is someone who does not eat any meat, poultry, game, fish, shellfish or by­products of animal slaughter. Vegetarian diets contain various levels of fruits, vegetables, grains, pulses, nuts and seeds. The inclusion of dairy and eggs depends on the type of diet you follow.

The most common types of vegetarians include:

• Lacto­-ovo vegetarians: Vegetarians who avoid all animal flesh, but do consume dairy and egg products.

• Ovo vegetarians: Vegetarians who avoid all animal products except eggs.

• Vegans: Vegetarians who avoid all animal and animal­derived products.

Those who do not eat meat or poultry but do consume fish are considered pescatarians, whereas part­time vegetarians are often referred to as flexitarians.

Although sometimes considered vegetarians, pescatarians and flexitarians do eat animal flesh. Therefore, they do not technically fall under the definition of vegetarianism.

The pronoun them (first paragraph) refers to:

What do the highlighted words in the text refer to? Choose the CORRECT option.

The theories on evolution and natural selection began with Charles Darwin, who made public his groundbreaking ideas in a book entitled On the Origin of Species, which was first published in 1859. Darwin found the inspiration for his ideas while on a research trip aboard the ship the H.M.S. Beagle. Darwin’s primary destination was the Galapagos Islands, and it was during his five-year voyage from his home in England that he developed his theory of natural selection.

What many people don’t know about Darwin is that his epic voyage on the H.M.S. Beagle, before arriving at the Galapagos Islands, he first arrived in South America in Bahia, Brazil in 1832. Additionally, Darwin wasn’t the only important European scientist to come to Brazil to study nature. Two of Darwin’s fellow Englishmen, Alfred Russel Wallace and Henry Walter Bates, they arrived at Pará in 1848. Wallace roamed the Amazon for four years, and the remarkable Bates explored the Amazon region for eleven years.

Snakebites: Like having my hand smashed by a hammer

David Williams has been bitten by a snake six
times. “The first time was pretty terrifying because I
didn’t know what to expect. It felt like having my hand
smashed with a hammer,” he says. “My last snakebite
[5] would have been a fatal one, but for the fact we were
carrying an emergency medical kit so we could do
something about it.”
Dr Williams, an expert on snakebites at the
World Health Organization (WHO) — who travels the
[10] world collecting snake venoms to help develop new
treatments - says most victims “don’t have that lifesaving luxury”.
The WHO calls snakebites “arguably the world’s
biggest hidden health crisis”, with one person
[15] dying from a bite every four minutes. Hundreds of
thousands of others are left seriously disfigured, with
many needing amputations. Snakebites mainly affect
people living in some of the poorest communities in
the poorest parts of Africa, Asia and Latin America.
[20] Farmers risk their lives and livelihoods every day
while simply tending to their crops, where deadly
snakes lurk. Children often become victims too.

So now two major health organisations — the
WHO and the UK’s Wellcome Trust — are taking
[25] steps to tackle snakebites. The Wellcome Trust is
investing £80m into a new programme to invest in
new treatments and better access to effective anti-

venoms. And the WHO is preparing to publish a plan
to halve the number of deaths and disabilities caused
[30] by snakebites by 2030.
“We’re at a very important point in the effort to do
something about snakebite for some of the poorest
people in the world,” says Dr Williams. “Many already
live in poverty and the consequence of snakebite is
[35] that they are driven further into debt and despair, even
if they survive.”
Snakebite, though potentially lethal, is treatable.
Wellcome’s director of science, Prof Mike Turner,
says: “With access to the right anti-venom there is
[40] a high chance of survival. “While people will always
be bitten by venomous snakes, there is no reason so
many should die.”

Dr Philip Price, science lead for snakebites at the
Wellcome Trust, says there is a “spiral of decline” when
[45] it comes to dealing with snakebites. “The treatments
are expensive, the people who need them often can’t
afford them, and in some cases people can’t make it
to the hospital in time.”

Dr Price said that even when people do reach
[50] hospital, sometimes the doctors are not trained
adequately, and often treatments are not available. He
said patients may instead turn to traditional healers,
meaning they “fly under the radar” so “most countries
aren’t even aware they have a snakebite problem”.
[55]    Anti-venom treatment is made in the same way
that it has been for more than 100 years. The costly
and laborious process sees antibodies harvested
from horse blood to make anti-venom. But even so, it
is estimated that the world produces only a third of the
[60] anti-venom that it needs.
The horses are given very low doses of snake
venom over long periods of time, so it does not harm
the animal, says Dr Price. “Eventually the blood is
taken from the horse, and the antibodies are purified
[65] out. The antibodies inside that blood then bind and
neutralise the venom. “It’s not without risk to inject this
directly into the patient.”

These risks mean victims have to be treated
in hospitals, which can take hours or even days for
[70] people to travel to. That is often too late to save lives
and limbs.
Another major challenge is that many of the anti-

venoms available are not actually effective. Different
types of snakebites need different types of anti-venom.
[75] In Africa, for example, up to 90% of available anti-

venom is thought to be ineffective. There is currently
no authoritative international list that exists of all the
anti-venoms available and what they actually treat.
Despite the challenges, achieving the WHO goal
[80] of halving deaths and disabilities from snakebites over
the next decade is “not all that difficult”, according to
Dr Williams. He has spent decades working on
improving snakebite treatments and education,
particularly in Papua New Guinea.
[85]     “In 2003 in Papua New Guinea, one in every four
children who were bitten by snakes died. Today it’s
less than one in every 50.” Dr Williams says whilst
this is still too many deaths, the solution is “not rocket
science”.
[90]    “It’s about having safe, effective anti-venoms,
trained health workers, communities that are engaged
in the problem and are taught how better to prevent
snakebite, and what to do when someone is bitten.”
He said a desperately needed spotlight is finally being
[95] placed on this avoidable killer.

In paragraph 11 of the text, These risks (line 68) include

The Mona Lisa was recently moved from her usual gallery in the Salle des États, currently being renovated, to a temporary home in the Galérie Médicis. Visitors to the Louvre who have queued patiently for hours are complaining that museum staff are allowing them less than a minute to view the masterpice. The relocation has created bottlenecks of visitors lining corridors and the Louvre is now advising that only those who have pre-booked will be guaranteed a glimpse of the world’s most famous portrait.

In the excerpt “only those who have pre-booked will be guaranteed a glimpse of the world’s most famous portrait”, the underlined word refers to

Considering the stretches “At first I thought that made me doubly cool…” and “Is that the battery light…?” the pronoun “that”, in both stretches, refers to, respectively: