The fantastic appeal of fantasy 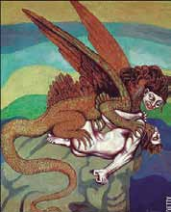 Few things can brighten up a dark morning in a Scottish seaside resort during an Atlantic storm. Yet while sheltering in a bookshop from the rain, I had a moment of sunny revelation. Stacked almost as high as my 11-year-old self were copies of The Lord of the Rings, with a cover illustration that promised mystery and magic. That chance discovery started a lifelong love of the fantasy genre1, both as reader and writer.

The fantasy genre has had more and more success, but today we’re in the middle of an unprecedented fantasy boom. Sales continue to rise and it is now the biggest genre in publishing. The more rational the world gets, with super-science all around us, the more we demand the irrational in our fiction.

Fantasy is not simply a case of swords2 and sorcery3. Yes, there is that by the shelf. But the genre is as broad as the imagination. The genre starts where science ends.

“In these modern times, where most of us sit at computers, fantasy books offer a chance to break out of mundane moments,” says Mark Newton, an editor with the genre. “People like to explore themes that go beyond the limited palette that literary fiction claims to offer.”

A search for the origins of fantasy will usually have academics muttering about Beowulf or Homer’s The Iliad, but they come from a time when all stories were fantasy: gods and monsters and supernatural artefacts with humanity caught in the middle. The first modern fantasy writer is usually considered to be William Morris, in the late 19th Century. But it was the early 20th Century where fantasy really started to gain status.

Fantasy fiction has always been about visionary ideas. You can get artful words in plenty of literary fiction, but being able to see beyond the boundaries4 of the world around us — now that’s a special skill.

I don’t write fantasy fiction simply to provide a trapdoor5 from the real world. For me, the genre is about the reality. But instead of coming up against it, fantasy maps the unconscious aspirations of our modern society through allegory in story- -forms as old as humanity. It’s about turning off the mobile phone and the computer and remembering who we are in the deepest parts of ourselves.

From what the doctor is saying, it is correct to say that the patient in this cartoon

When Sudan, the last northern white rhino bull, died
in March 2018, that left alive only two females of
the subspecies once common in Central and East
Africa.Both are descendants of Sudan and live in Kenya,
[5] and were considered infertile. But now, new hope is
emerging that extinction of the species can still be
prevented. Researchers have successfully created living
embryos in the laboratory from frozen sperm of the
northern white rhinoceros and egg cells from the southern
[10] white rhinoceros. It’s the most closely related
subspecies, with more than 20,000 southern rhinos living
in the wild.
Although such hybrid embryos are not pure northern
white rhinoceros, the researchers are optimistic. They
[15] plan to take egg cells from the still living northern
rhinoceros females in autumn of this year, and to fertilize
them with stored sperm from the same species.They
then intend to implant the oocytes into fertile southern
rhinoceros females in early 2019. This method is also
[20] used in human reproductive medicine.
Even if healthy rhinoceros calves can be
produced, whether the northern white rhino can be saved
in the long term remains unclear. As the sperm comes
from a few rhinoceros bulls, limited genetic diversity could
[25] endanger the health of a newly bred northern white rhino
population. Due to the smaller gene pool, such inbreeding
typically leads to higher rates of recessive disorders,
translating into higher death rates and poorer overall
health.
[30]    Still, the research unit is hoping that stem cell
technology can create more eggs and sperm from the
skin cells of 12 northern whites, increasing the supply
and genetic variety. If the scientists pull it off, they’ll
both rescue a seemingly doomed animal and provide a
[35] blueprint for protecting other animals teetering on the
edge of oblivion.

The only alternative that does not complete this blank correctly is

Read the cartoon and answer question.

Which words complete the lines in the cartoon? 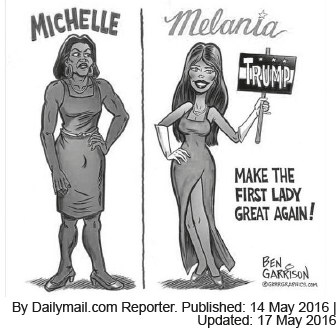 [1] A cartoonist has been accused of racism

after he portrayed Michelle Obama as

masculine and butch next to a pageant-

ready Melania Trump in a controversial

The cartoon – which has been branded

‘racist and misogynistic’ – shows a muscular

Mrs Obama wearing a green dress with a

bulge in the groin area.

[10] Stood next to her is a feminine, smiling

Melania Trump in a pink dress and holding

as hell and reverts back to stereotypes that

black women are angry and masculine’.

need to denigrate Michelle to prop up

they’re too stupid to understand that’.

Garrison is known for his controversial

political cartoons and – looking at his work

– appears to be a supporter of Republican

Considering grammar aspects, mark the sentences below true (T) or false (F). Then, check the only alternative that is correct.

IV. as racist as (l. 15 and 16) is an adjective in its comparative form of equality.

(BANGKOK) — Conservationists say there’s a new threat to the survival of Africa’s endangered elephants that may be just as deadly as poachers’ bullets: the black-market trade of ivory in cyberspace.

Illegal tusks are being bought and sold on countless Internet forums and shopping websites worldwide, including Internet giant Google, with increasing frequency, according to activists. And wildlife groups attending the 178-nation Convention on International Trade in Endangered Species in Bangkok this week are calling on global law enforcement agencies to do something about it.

The elephant slaughter, which has reached crisis proportions unheard of in two decades, is largely being driven by skyrocketing demand in Asia, where tusks are often carved into tourist trinkets and ornaments.

“The Internet is anonymous, it’s open 24 hours a day for business, and selling illegal ivory online is a low-risk, high-profit activity for criminals,” Tania McCrea-Steele of the International Fund for Animal Welfare told The Associated Press on Tuesday from London.

In one investigation last year, IFAW found 17,847 elephant products listed on 13 websites in China. The country, which conservationists call the world’s top destination for “blood ivory” from Africa, is not alone.

IFAW says illegal ivory trading online is an issue within the U.S., including on eBay, and it is rife on some websites in Europe, particularly nations with colonial links to Africa.

The expression ‘as deadly as’ in the underlined sentence: ‘Conservationists say there’s a new threat to the survival of Africa’s endangered elephants that may be just as deadly as poachers’ bullets’, conveys an idea of