Match the questions and answers.

I- How's Mary?
II- What does Cindy do?
III- Whose daughter is Karen?
IV- How much meat does your sister have on a regular meal?
V- Hou many friends do Mark and Sue have on Facebook?

Mark the option that shows the correct order of answers.

Read text to do question based on it.

How to Plan a Movie-Themed Vacation

lt's easier than you may expect to find, visit, and enjoy the places where your favorite movies were made.

Whether it's the “Lord of the Rings” trilogy in New
Zealand or “Roman Holiday” in Rome, many noteworthy
movies are filmed in appealing locales all over the world
that travelers may want to visit and enjoy.

According to Angela Tillson, a film location manager in
Kauai who has worked on the set of films including
“Jurassic Park: The Lost World" and “The Descendants,"
exploring a beloved movie set destination through the eyes
of the film makes for an enjoyable vacation. “Seeing a
place with a focus on a movie you love will give you a
perspective that the average tourist doesn't usually get.
You'll certainly have a better impression of the place,” she
said. Here are her tips to get started.

If there's a movie you love, you can find out where it
was filmed by looking at the credits at the end of the film or
by going online to The Internet Movie Database, also
known as IMDB, which often lists filming locations. Once
you know the locale, you can start planning your trip. Or,
consider doing what Ms. Tillson often does when deciding
on where to vacation: pick a spot you're interested in
visiting, and find out what movies have been filmed there.
“It's fun to sometimes let a destination determine the movie
you're going to live rather than the other way around,” Mis.
Tillson said.

Get in the Mood

Before you head to your destination, be sure to
rewatch the movie. A rewatch not only reminds you of
identifiable spots to look out for during your trip, but it also
adds to the excitement of your upcoming exploration.

If the movie is based on a book, consider reading the
book, too. It may have details about the locale that the
movie doesn't touch on. Also, books often have scenes
that don't make it into the movie adaptations, which gives
you a deeper view of the destination. Ms. Tillson also
recommended downloading the movie's soundtrack or
score, and listening to it throughout your trip.

Some travel companies sell set itineraries focused on
popular movies. Luxury tour operator Zicasso, for example,
has an eight-day trip, all inclusive, to Ireland inspired by
“Star Wars: The Last Jedi" and Wild Frontiers has an
eleven-day trip to India inspired by “The Best Exotic
Marigold Hotel” Ms. Tillson suggested doing a web search
or checking with a travel agent to find out about such trips.

Also, in some destinations, local tour operators and
hotels sell movie-themed tours. For instance, The St. Regis
Priceville Resort offers a tour that includes a private

helicopter ride to Manawaiopuna Falls, made famous in

“Jurassic Park,” and an ATV tour of filming locations of

movies such as “Raiders of the Lost Ark" and “Pirates of

the Caribbean.” Lunch is even included. The cost is $5,674
for two adults.

A more affordable option, in Rome, is the four-hour
"Roman Holiday” themed excursion from HR Tours, where
travelers ride a Vespa with a driver and see all the sites
from the movie; the cost is 170 euros per person.

Hang Where the Movie Crew Did
When they're not working, movie crews enjoy hitting

cuisine, Ms. Tillson said.
Find out where the behind-the-scenes staff of your
film spent their time by asking your destination's tourist
board or your hotel's concierge, and check out a few of the
spots. “lts another way to get involved in the film and
spend time in bars and restaurants that you wouldn't
normally think to hit,” she said.

Mark the correct question for the following answer.

Angela Tillson is a film location manager in Kauai who has worked on the set of films including “Jurassic Park: The Lost World” and “The Descendants”.

After reading the strip below, you can conclude that the dog: 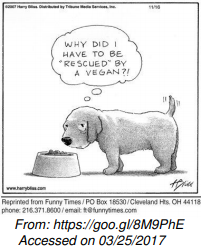 5. What do you have for lunch?

The CORRECT sequence is

Choose the correct answer to fill in the blank: