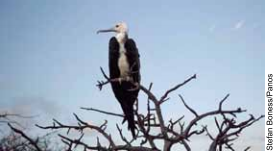 Rare animal species are vital to maintaining tropical ecosystems and could cause a chain reaction of disastrous biodiversity loss if they go extinct, a study warns.

Animals that are considered rare – because they occupy a niche environment or there are few of them – are more likely than common animals to perform specialised and often irreplaceable roles in their environments, the study found. This is especially true for highly biodiverse environments, such as the tropics, the researchers say. “Losing rare species today may mean losing much more complex processes in the long term,” says lead author Rafael Leitão, a biologist at the National Institute of Amazonian Research in Manaus, Brazil.

The study notes that rare animals perform essential “ecosystem services” such as dispersing seeds, filtering water and controlling other animal populations and invasive species. “There is no way to know exactly how, in future, an ecosystem     11     with the loss of those rare species, but chain effects are common, meaning that the loss of some functions can lead to other losses, making the whole environment crumble,” says Leitão.

Obi was away in England for a little under
four years. He sometimes found it difficult to
believe that it was as short as that. It seemed
more like a decade than four years, which
[5] with the miseries of winter when his longing
to return home took on the sharpness of
physical pain. It was in England that Nigeria
first became more than just a name to him.
That was the first great thing that England did
[10] for him. But the Nigeria he returned to was in
many ways different from the picture he had
carried in his mind during those four years.
There were many things he could no longer
recognize, and others — like the slums of
[15] Lagos — which he was seeing for the first
time.
As a boy in the village of Umuofia, he had
heard his first stories about Lagos from a
soldier home …….. leave from the war. Those
[20] soldiers were heroes who had seen the great
world. They spoke of Abyssinia, Egypt,
Palestine, Burma and so on. Some of them
had been village ne'er-do-wells, but now they
were heroes. They had bags and bags of
[25] money, and the villagers sat …….. their feet
to listen to their stories. One of them went
regularly to a market in the neighbouring
village and helped himself to whatever he
liked. He went in full uniform, breaking the
[30] earth with his boots, and no one dared touch
him. It was said that if you touched a soldier,
Government would deal with you. Besides,
soldiers were as strong as lions because of
the injections they were given …….. the army.
[35] It was from one of these soldiers that Obi had
his first picture of Lagos.
‘There is no darkness there,' he told his
admiring listeners, `because at night the
electric shines like the sun, and people are
[40] always walking about, that is, those who want
to walk. If you don't want to walk, you only
have to wave your hand and a pleasure car
stops for you.' His audience made sounds of
wonderment. Then by way of digression he
[45] said: 'If you see a white man, take off your
hat for him. The only thing he cannot do is
mould a human being.'

( ) O trecho the Nigeria he returned to (l. 10) poderia ser susbstituído por the Nigeria to which he returned, sem prejuízo da correção gramatical e do significado original do texto.

[1] Human populations live in an extraordinary variety of different habitats: hot and cold, wet and dry; in

forests, grasslands and tundra. Different human groups feed on a wide variety of food sources. For

many populations, diets shifted further with the development of agriculture in the past 10,000 years.

To what extent have these and other factors led to genetic adaptation?

interactions between genes and the environment –, but scientific studies have shown that phenotypic

differences have a genetic basis and are adaptive. For example, mammals that live in cold climates

tend to have larger, rounder bodies and shorter limbs than members of the same or closely related

species in warm climates. These patterns do appear to also hold in humans, implying that population

{10}movements into colder climates were accompanied by adaptation to larger, stockier body shape,

presumably to improve thermal efficiency. At the other end of the spectrum is the pygmy phenotype

that has evolved in rainforest populations in Africa, South-East Asia and South America. Research

has suggested that this phenotype may be an adaptation to food limitations, high humidity or dense

{15}Another impressive example of adaptation is provided by human populations living at high altitude,

especially in the Himalayas and the Andes. Compared to related lowland populations, these highelevation

populations show a group of physiological adaptations to low oxygen. These adaptations

include markedly increased blood flow and oxygen delivery to the uterus during pregnancy,

substantially reducing the risk of babies with low birthweight. Current evidence suggests that these

{20}differences are not simply the result of recent acclimation, but are at least partly genetic. If this is

the case, then the adaptation must have occurred rapidly, because these high altitude regions were

Skin pigmentation is perhaps the phenotype that varies most obviously among human populations.

Dark pigmentation is strongly associated with tropical climates, and the spread of prehistoric humans

{25}into northern latitudes was accompanied by a shift to lighter skin color. We now know of at least half

a dozen different genes that affect skin, hair or eye pigmentation. In particular, the evolution of light

skin color occurred largely in parallel in western Eurasia and east Asia, but we still know few of the

relevant genes in east Asia. Adaptation to lighter pigmentation may have been motivated by a need

to increase UV absorption for vitamin D synthesis at high latitudes or by sexual selection.

{30}These are only a few cases of genetic adaptation. There are surely some – perhaps many – other

factors yet to be found.

The expression yet to be found is used to represent an action which: