(CNN) –- Some people set records by jumping the highest or running the fastest.
But for Jessica Nabongo, a UN employee turned travel blogger, it's by becoming the first black woman to visit
every country on Earth.
She set out to visit all 193 countries in the world in 2016, and on October 6 arrived the last on her list, Seychelles,
[5] according to a post on her Instagram page. She also clocked up a couple of what the UN calls "non-observer status"
territories, taking her total to 195.
"Welcome to the Seychelles!! Country 195 of 195! So much to say but for now I will just say thank you to this entire
community for all of your support. This was our journey and thanks to all of you who came along for the ride!!," she
wrote.
[10]    Born in Detroit to Ugandan parents and holding two passports, Nabongo's epic odyssey hasn't just been about
getting her name in a record book.
She's hoping to pave the way for women and people of color to do the same.
Although she felt like she'd achieved "the American dream" by landing a six-figure job at a pharmaceutical
company after college and buying her own place in the Motor City, the work didn't satisfy her.
[15]    Often, as the only person of color in a crowd, she stood out whether she wanted to or not. Nabongo also has dark
skin and shaves her head.
To date, there are about 150 known people who have been to every country, the majority of whom are white men
traveling on European passports –- the ones who have the option to "blend in" in more places.
As of April 2018, there were 193 recognized countries in the United Nations, plus two with "non-observer status".
[20]    Nabongo visited them all. Her passports have stamps from places as far-flung as Nigeria, Cuba, Turkey and Laos.

A forma CORRETA de linguagem indireta da sentença “[...] I will just say thank you to this entire community for all of your support.” (linhas 7-8) corresponde a:

Obi was away in England for a little under
four years. He sometimes found it difficult to
believe that it was as short as that. It seemed
more like a decade than four years, which
[5] with the miseries of winter when his longing
to return home took on the sharpness of
physical pain. It was in England that Nigeria
first became more than just a name to him.
That was the first great thing that England did
[10] for him. But the Nigeria he returned to was in
many ways different from the picture he had
carried in his mind during those four years.
There were many things he could no longer
recognize, and others — like the slums of
[15] Lagos — which he was seeing for the first
time.
As a boy in the village of Umuofia, he had
heard his first stories about Lagos from a
soldier home …….. leave from the war. Those
[20] soldiers were heroes who had seen the great
world. They spoke of Abyssinia, Egypt,
Palestine, Burma and so on. Some of them
had been village ne'er-do-wells, but now they
were heroes. They had bags and bags of
[25] money, and the villagers sat …….. their feet
to listen to their stories. One of them went
regularly to a market in the neighbouring
village and helped himself to whatever he
liked. He went in full uniform, breaking the
[30] earth with his boots, and no one dared touch
him. It was said that if you touched a soldier,
Government would deal with you. Besides,
soldiers were as strong as lions because of
the injections they were given …….. the army.
[35] It was from one of these soldiers that Obi had
his first picture of Lagos.
‘There is no darkness there,' he told his
admiring listeners, `because at night the
electric shines like the sun, and people are
[40] always walking about, that is, those who want
to walk. If you don't want to walk, you only
have to wave your hand and a pleasure car
stops for you.' His audience made sounds of
wonderment. Then by way of digression he
[45] said: 'If you see a white man, take off your
hat for him. The only thing he cannot do is
mould a human being.'

Assinale a alternativa que apresenta reescrita adequada, em discurso indireto, para a frase Then by way of digression he said: 'If you see a white man, take off your hat for him' (l. 44-46). 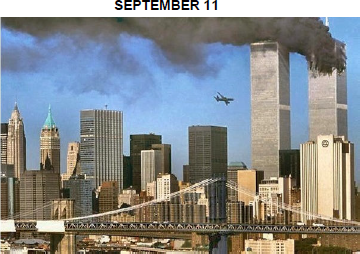 against targets in the United States. Two of the planes

Washington, D.C., and the fourth plane crashed in a field

in Pennsylvania. Often referred to as 9/11, the attacks

the presidency of George W. Bush. Over three thousand

people were killed during the attacks in New York City

and Washington, D.C., including more than four hundred

thousand gallons of jet fuel crashed into the north tower

of the World Trade Center in New York City. The impact

minutes after the first plane hit, a second Boeing 767–

United Airlines Flight 175–appeared out of the sky,

turned sharply toward the World Trade Center and

burning fragment over surrounding buildings and the

streets below. America was under attack.

The attackers were Islamic terrorists from Saudi

retaliation for America's support of Israel, its involvement

in the Persian Gulf War and its continued military

[35]  presence in the Middle East. Some of the terrorists had

lived in the United States for more than a year and

As millions watched the events unfolding in New

Washington, D.C., and banged into the west side of the

the Boeing 757 caused a devastating inferno that led to

the structural collapse of a portion of the giant concrete

[45]  building. Less than fifteen minutes after the terrorists

struck the nerve center of the U.S. military, the horror in

New York took a catastrophic turn for the worse when

the south tower of the World Trade Center collapsed in a

thousand people died in the World Trade Center and its

vicinity, including an impressive three hundred and forty

[55]  officers who were struggling to complete an evacuation

of the buildings and save the office workers trapped* on

United Flight 93–was hijacked about forty minutes after

Because the plane had been delayed in taking off,

passengers on board learned of events in New York and

Washington via cell phone calls to the ground. Knowing

that the aircraft was not returning to an airport as the

[65]  hijackers claimed, a group of passengers and flight

attendants planned a rebellion. One of the passengers,

Thomas Burnett Jr., told his wife over the phone that "I

know we're all going to die. There are three of us who

are going to do something about it. I love you, honey."

"Are you guys ready? Let's roll" over an open line.

The passengers fought the four hijackers and

are suspected to have attacked the cockpit with a fire

extinguisher. The plane then flipped over and sped

[75]  toward the ground, crashing in a rural field in western

Pennsylvania at 10:10 a.m. All forty-five people aboard

were killed. Within two months, U.S. forces had

but the war continued. Osama bin Laden, was finally

The sentence “Thomas Burnett Jr. told his wife over the phone that ‘I know that we’re all going to die’ ” is similar in meaning to

The equivalent of the woman’s question in Reported Speech is

The alternative that completes the blanks correctly is

Which sentence is correct?

Which is the correct option to complete the sentence?