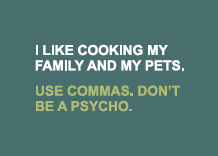 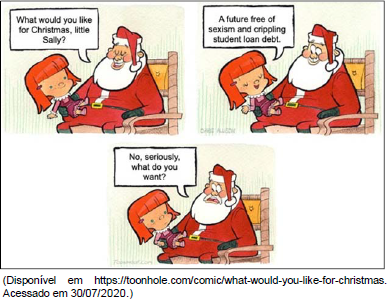 Airborne particles cause more than 3m early deaths a year 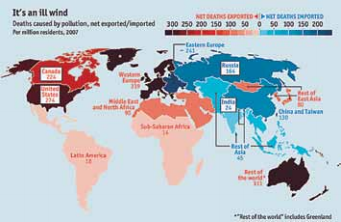 Governments are worried over traffic and other local nuisances that create filthy air. But research just published in Nature by Zhang Qiang, of Tsinghua University in Beijing, and an international team including environmental economists, physicists and disease experts, suggests the problem has a global dimension, too. Dr Zhang’s analysis estimates that in 2007 — the first year for which complete industrial, epidemiological and trade data were available when the team started work — more than 3m premature deaths around the world were caused by emissions of fine particulate matter (known as PM2.5, because the particles in question are less than 2.5 microns across).

Of these, the team reckon just under an eighth were associated with pollutants released in a part of the world different from that in which the death occurred, thanks to transport of such particles from place to place by the wind. Almost twice as many (22% of the total) were a consequence of goods and services that were produced in one region (often poor) and then exported for consumption in another (often rich, and with more meticulous environmental standards for its own manufacturers).

In effect, such rich countries are exporting air pollution, and its associated deaths, as they import goods. As far as China is concerned, that phenomenon is probably abating. Chinese coal consumption has been on the wane since 2013, so premature deaths there from toxic air are now probably dropping. But other industrialising countries, such as India, may yet see an increase.

No trecho do terceiro parágrafo “so premature deaths there from toxic air are now probably dropping”, o termo sublinhado equivale, em português, a

He told the Richmond Times-Dispatch that video from one doorbell camera showed a person wearing TVshaped headgear while dropping off a TV set. Police believe that more than one person is responsible. A similar incident occurred in a nearby neighborhood last year. It’s unclear if the incident is a crime. Pecka said that dropping off the televisions on front porches is “at most” illegal dumping.

Most of the TVs will be recycled. But a couple residents indicated they would keep their televisions for now.

Is alkaline water really better for you? 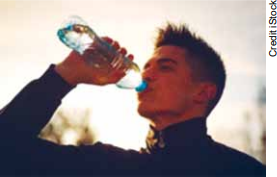 The pH scale indicates whether a liquid is more acidic (lower pH) or alkaline (higher pH). Pure water has a neutral pH of 7, while tap water has some natural variation depending on its mineral content. Most bottled waters are slightly acidic, and sodas and juices are even more so. Bottled waters marketed as being alkaline typically claim to have a pH between 8 and 10. Some are from springs or artesian wells and are naturally alkaline because of dissolved minerals. Others are made with an ionizing process, and water ionizing machines are also marketed for home use.

Alkaline water companies make vague claims that it will “energize” and “detoxify” the body and lead to “superior hydration.” And some claim that ionized water can prevent everything from headaches to cancer. Nevertheless, there’s no evidence that drinking water with a higher pH can change the pH of your body, or even that this outcome would provide benefits. Blood is tightly regulated at around pH 7.4, while the stomach, which secretes hydrochloric acid to digest proteins and kill food-borne pathogens, is very acidic, with a pH of 1.5 to 3.5. If you drink water that is slightly alkaline, Dr. Fenton said, the hydrochloric acid in the stomach quickly neutralizes it before it’s absorbed into the blood.

A study published last year found that adopting a plantbased diet and drinking alkaline water worked as well as medications to alleviate the symptoms of laryngopharyngeal reflux, a severe form of acid reflux in which stomach acid travels all the way up to the throat. “I think that it can be a helpful tool for patients to help with their symptoms while they’re transitioning to a more plant-based diet,” said Dr. Craig Zalvan, the study’s lead author and a laryngologist at Phelps Hospital in Sleepy Hollow, N.Y. But he believes that most of the improvement in his patients comes from dietary changes rather than alkaline water. Once symptoms improve, he says there’s no need to keep drinking alkaline water.

O trecho do quinto parágrafo “a severe form of acid reflux in which stomach acid travels all the way up to the throat”, configura, em relação à expressão “laryngopharyngeal reflux”, uma

protests. Within days this had become a nationwide movement whose concerns had

spread far beyond fares: more than a million people were on the streets shouting about

In Turkey, it was a similar story. A protest over the future of a city park in Istanbul snowballed

too into something bigger, a wider-ranging political confrontation with prime minister.

If the recent scenes have seemed familiar, it is because they shared common features: viral,

[10] Unlike the protest movement of 1968, or even the end of Soviet influence in Eastern Europe

in 1989, these are movements with few discernible leaders and often conflicting ideologies.

Their points of reference are not even necessarily ideological, but take inspiration from

other protests, including those of the Arab Spring and the Occupy movement. The result

In Brazil, the varied banners underlined the difficulty of easy categorisation as protesters

Press. “On the one hand, we need some sort of leadership; on the other, we don’t want

this to be compromised by being affiliated with any political party.”

As the Economist pointed out, while mass movements in Britain, France, Sweden and Turkey

[25] have been inspired by a variety of causes, including falling living standards, authoritarian

government and worries about immigration, Brazil does not fit the picture, with youth

So what’s going on? “This is a very peculiar moment”, Saskia Sassen, a sociology professor

[30] at Columbia University, New York, told the Observer. She argues that one distinguishing

by the involvement of what she calls “the modest middle class”, who have often been

beneficiaries of the systems they are protesting against, but whose positions have been

[35] opportunities captured by a narrowing minority. As people have come to feel more distant

from government and economic institutions, a large part of the new mass forms of dissent

has come to be seen as an opportunity to demonstrate ideas of “citizenship”.

confirmed overtly − in the case of Brazil, at least.

From the first to the fourth paragraph, various protest movements in different countries of the world are mentioned.

The author establishes links among them by means of the following textual strategy: