A new study provides insight into how Facebook use by young women can lead to poor body image and risky dieting. The study included 128 college-aged women who completed an online survey about their eating habits and their emotional connection to Facebook – such as how much time they spent on the social networking site and number of Facebook friends – and whether they compared their bodies to friends’ bodies in online photos.

The University of North Carolina School of Medicine study is published in the August issue of the Journal of Adolescent Health. “I think that Facebook could be an amazing tool to nurture social support and connections with friends and families. And if you’re getting that kind of social support from the site, you might be less likely to be worried about your body size,” senior author Stephanie Zerwas, assistant professor of psychiatry, said in a university news release. “But if you’re using it as a measuring stick to measure how your body appears in pictures compared to your friend’s body, Facebook could also be used as a tool to foster dangerous dieting behavior,” she added.

No último parágrafo, a autora do estudo Stephanie Zerwas

THIS COULD PUT BIOPSIES OUT OF BUSINESS

At last month’s American Physical Society meeting, Dartmouth researcher Mary Ann Myeek described a new laser system that will help doctors identify a malignant tumor without having to do a biopsy. The laser system can detect slight chemical and structural changes in a tissue that may signify the very early stages of cancers. When tested on patients with colon polyps, this new detection method was just as accurate as conventional procedures.

Normally, when a doctor finds a suspicious growth a piece of the tissue is removed and sent to laboratory for analysis. Getting the result can take days even weeks. Myeek’s new laser system, however, gives immediate answers, and it’s much less invasive than a biopsy. Myeek’s team tested the laser system on 17 patients who were undergoing routine colon examinations. Every time a polyp was discovered, doctor took a picture of the tissue’s molecular structure with the laser. For comparison, a tissue sample was also biopsied. In nearly every case, the two methods gave similar results. Myeek says this device could be widely available in a few years.

Identifique no texto “This could put Biopsies out of Business” as duas principais vantagens da nova descoberta. 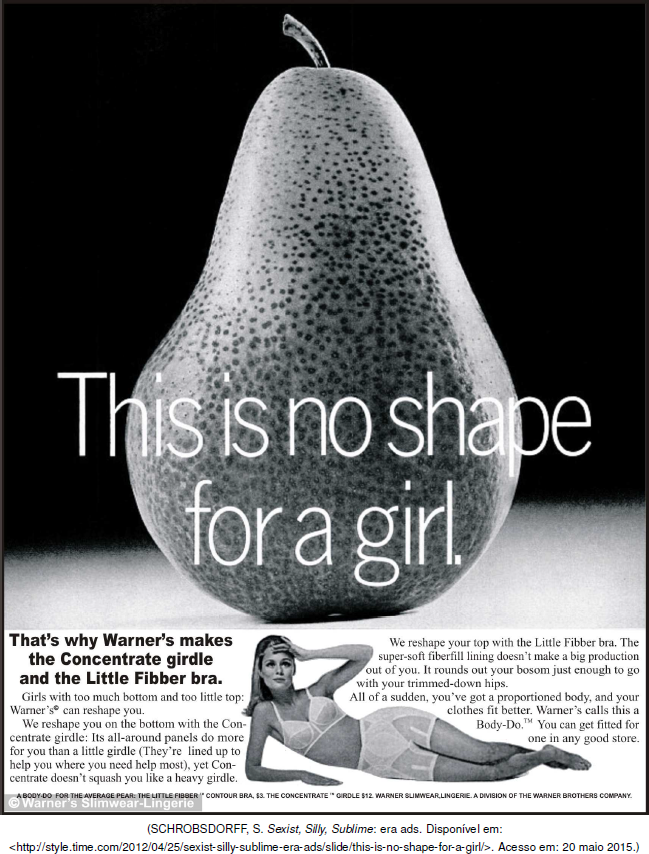 I. Concentrate doesn’t squash you like a heavy girdle.

II. Girls with too much bottom and too little top: Warner’s can reshape you.

III. They’re lined up to help you where you need help most.

IV. All of a sudden, you’ve got a proportioned body, and your clothes fit better.

Em relação à exploração da preocupação social com um ideal de padrão físico subentendido no anúncio publicitário, considere as afirmativas a seguir. I. Concentrate doesn’t squash you like a heavy girdle. II. Girls with too much bottom and too little top: Warner’s can reshape you. III. They’re lined up to help you where you need help most. IV. All of a sudden, you’ve got a proportioned body, and your clothes fit better. Assinale a alternativa correta.

Read the text below:

Women own or manage more than 30 percent of all businesses but 5 percent or less of the biggest enterprises, the United Nations said in a report published Monday.

The report, by the International Labor Organization, a United Nations agency based in Geneva, also estimated that without new actions to promote women’s equality in management, it would take 100 to 200 years to achieve gender parity in business leadership positions.

Posted on the I.L.O.’s website, the report was done by the organization’s Bureau for Employers’ Activities. It was based on information from 108 countries where I.L.O. data is available, as well as the findings of the organization’s survey of more than 1,200 companies in Africa, the AsiaPacific region, Eastern and Central Europe and the Latin America-Caribbean regions. [...]

GLADSTONE, Rick. Women Run 30 Percent of All Businesses, but Only 5 Percent of the Biggest Study Shows. The New York Times, jan. 12, 2015.