hospital has seen a significant victory this weekend with backing from senior politicians. The

Observer-backed campaign has won the

has promised to write to all NHS trusts promoting

the idea, while the shadow health secretary,

Andy Burnham, has committed to strengthening

the NHS constitution on the issue and including it

[2] “I could have wept with gratitude and relief,” said

novelist Nicci Gerrard, whose experiences with

her father's hospital care led her to launch John's

Campaign. It calls for the families and carers of

people with dementia to be allowed to remain

with them in hospital for as many hours of the day

and night as necessary. The campaign has been

deluged with support, not only from families but

from doctors, nurses and charities working with people with dementia. Several NHS trusts have

compassion. It is, she writes in the Observer today, “a rare instance where the costs in both

financial and human terms are none and the benefits enormous”.

[4] More than a quarter of hospital beds in the UK are now occupied by people with dementia. Athird

when they entered. Gerrard's father, Dr John Gerrard, who was diagnosed with Alzheimer's in his

70s, deteriorated significantly during his hospital stay last year, something his family felt could

have been avoided had they been allowed to spend more time supporting him while he was there.

[5]   The campaigners, backed by Labour MP Valerie Vaz among others, believe the current NHS

should also apply to people with dementia, who are often vulnerable and very easily distressed.

[6]   On Wednesday, which is NHS Change Day – a chance for positive changes at grassroots level to

behalf of John's Campaign, across thousands of social media accounts, including Twitter and 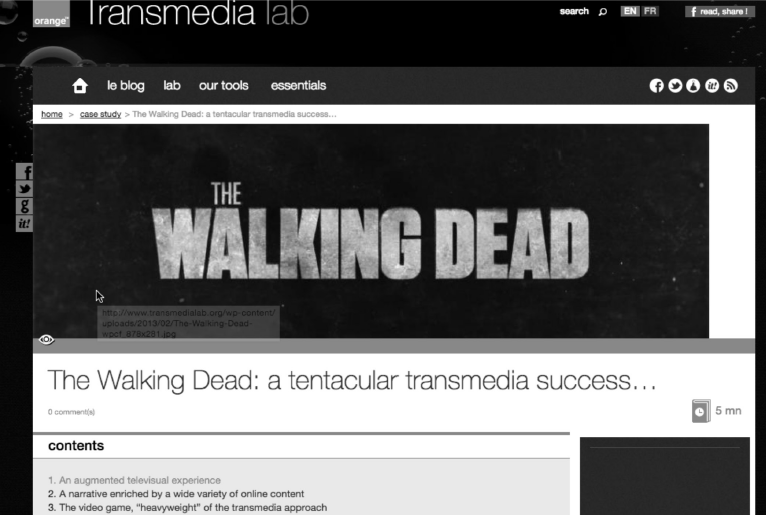 [1]       Even if the figure of the zombie appeared only relatively recently in popular western culture, it has enjoyed

[2]  almost continuous success since the 60s and the release of Night Of The Living Dead by Romero. A success

[3]  that the series The Walking Dead is definitely being driven by, inspired by the series of comic books of the same

[4]  name created by Robert Kirkman in 2003. With the help of the film director Frank Darabont, he also contributed

[5]  towards its adaptation for the American channel AMC, which has been showing the series since September

[7]      The plot of The Walking Dead revolves around the character Rick Grimes, a police officer who discovers

[8]  when coming out of a prolonged coma that the majority of the human race has been transformed into zombies.

[9]  Along with other survivors, he attempts to make an existence last longer in the heart of an America that has

[10]  been devastated and invaded by the hordes of the living dead.

[11]      In the same way as for the comic book, the TV series became an immediate success and even achieved

[12]  record audiences as The Walking Dead is now the most watched series in the history of American cable TV.

[13]  An enthusiasm clearly created by the comic books and the televised episodes, but that is also driven by a vast

[14]  transmedia presence that offers the TV viewer an ever more innovative narrative experience.

[16]  To achieve this, The Walking Dead has been adapted to a variety of special media, all of which contri-

[17]  bute a new dimension to the overall narrative. Even for the television, AMC does not simply show the episodes

[18]  in the series. Since 2011, the channel has been producing a 30 minute talk show presented by the comedian

[19]  Chris Hardwick: Talking Dead is thus positioned as the direct extension of the TV series and actors, fans and

[20]  members of the production crew are invited to take part.

[21]  In the same spirit of complementing the TV series, AMC has also developed The Walking Dead

[22]  Story Sync, a so-called double screen application, which will allow the user to post live comments on the episodes,

[23]  respond to surveys and talk to other fans via a chat system.

[1]     Halloween’s origins date back to the ancient Celtic
festival of Samhain. The Celts, who lived 2,000 years ago in
the area that is now Ireland, the United Kingdom and northern
[4 ]France, celebrated their new year on November 1. This day
marked the end of summer and the harvest and the beginning
of the dark, cold winter, a time of year that was often
[7] associated with human death. Celts believed that on the night
before the new year, the boundary between the worlds of the
living and the dead became blurred. On the night of October 31
[10] they celebrated Samhain, when it was believed that the ghosts
of the dead returned to earth. In addition to causing trouble and
damaging crops, Celts thought that the presence of the
[13] otherworldly spirits made it easier for the Druids, or Celtic
priests, to make predictions about the future. To commemorate
the event, Druids built huge sacred bonfires, where the people
[16] gathered to burn crops and animals as sacrifices to the Celtic
deities. During the celebration, the Celts wore costumes,
typically consisting of animal heads and skins, and attempted
[19] to tell each other’s fortunes.
Internet: <www.history.com> (adapted).

Based on the text, it is true to infer that

the Samhain festival marked the end of the summer cycle and the beginning of fall.

The Industrial Revolution is mentioned to emphasize the relevance of the French Revolution, the text’s main topic.

Coca-Cola history began in 1886 when the curiosity of an Atlanta pharmacist, Dr. John S. Pemberton, led him to create a distinctive tasting soft drink that could be sold at soda fountains. He created a flavored syrup, took it to his neighborhood pharmacy, where it was mixed with carbonated water and deemed “excellent” by those who sampled it. Dr. Pemberton’s partner and bookkeeper, Frank M. Robinson, is credited with naming the beverage “Coca-Cola” as well as designing the trademarked, distinct script, still used today. Prior to his death in 1888, just two years after creating what was to become the world’s #1-selling sparkling beverage, Dr. Pemberton sold portions of his business to various parties, with the majority of the interest sold to Atlanta businessman, Asa G. Candler. Under Mr. Candler’s leadership, distribution of Coca-Cola expanded to soda fountains beyond Atlanta. In 1894, impressed by the growing demand for Coca-Cola and the desire to make the beverage portable, Joseph Biedenharn installed bottling machinery in the rear of his Mississippi so-da fountain, becoming the first to put Coca-Cola in bottles. Large scale bottling was made possible just five years later, when in 1899, three enterprising businessmen in Chattanooga, Tennessee secured exclusive rights to bottle and sell Coca-Cola. The three entrepreneurs purchased the bottling rights from Asa Candler for just $1. Benjamin Thomas, Joseph Whitehead and John Lupton developed what became the Coca-Cola worldwide bottling system.

Select the alternative that is TRUE according to the text.

How long did it take to build the Great Pyramid?

The oldest of the Seven Wonders of the Ancient World and the only one that survives today, the Great Pyramid of Giza was constructed as a tomb for the Egyptian pharaoh Khufu. The precise details regarding the pyramid’s construction remain a mystery, as no written records have been found, but a number of estimates place its completion at sometime between 2560 B.C. and 2540 B.C. The pyramid initially rose about 481 feet, making it the world’s tallest man-made structure for thousands of years until it was surpassed in the early A.D. 1300s by England’s Lincoln Cathedral. Due to erosion, the pyramid now stands around 455 feet tall.

Covering an area of 13 acres, the massive monument was designed to align with the points of the compass and built with an estimated 2.3 million stones, each weighing a ton or more on average. The workforce is thought to have consisted of thousands of skilled tradesmen and paid laborers, as opposed to slaves, and estimates suggest the project took about two decades to complete. It’s been speculated that workers created ramps in order to move the stone building blocks into place on the pyramid.

In addition to Khufu’s pyramid, two other large pyramids for pharaohs were erected at the Giza site, one for his son Khafra (it originally stood 471 feet high) and the other for Khafra’s son Menkaure (originally 218 feet high). Khafra’s pyramid complex is home to the famous Great Sphinx statue, which measures 241 feet long and about 66 feet high. Over the ages, all three pyramids have been targeted by grave robbers and much of their exterior white limestone stolen, possibly for use in other building projects.

Mark the FALSE alternative, according to the text.