People need to more than halve their intake of added sugar to tackle the obesity crisis, according to scientific advice for the government in England.

A report by the Scientific Advisory Committee on Nutrition (SACN) says sugar added to food or naturally present in fruit juice and honey should account for 5% of energy intake. Many fail to meet the old 10% target. The sugar industry said “demonizing one ingredient” would not “solve the obesity epidemic”.
The body reviewed 600 scientific studies on the evidence of carbohydrates – including sugar – on health to develop the new recommendations. One 330ml can of soft drink would take a typical adult up to the proposed 5% daily allowance, without factoring in sugar from any other source.
Prof Ian MacDonald, chairman of the SACN working group on carbohydrates, said: “The evidence that we have analyzed shows quite clearly that high free sugars intake in adults is associated with increased energy intake and obesity. There is also an association between sugar-sweetened beverages and type-2 diabetes. In children there is clear demonstration that sugar-sweetened beverages are associated with obesity. By reducing it to 5% you would reduce the risk of all of those things, the challenge will be to get there.”
The target of 5% of energy intake from free sugars amounts to 25g for women (five to six teaspoons) and 35g (seven to eight teaspoons) for men, based on the average diet.
Public Health Minister for England, Jane Ellison, said: “We know eating too much sugar can have a significant impact on health, and this advice confirms that. We want to help people make healthier choices and get the nation into healthy habits for life. This report will inform the important debate taking place about sugar.”

We’re often told to eat more fruits and vegetables, but the chances that you’ll lose weight just by eating more of these foods are slim. New research suggests increased fruit and vegetable intake is only effective for weight loss if you make an effort to reduce your calorie intake overall.
In other words, you need to exercise or consume fewer calories to shed those pounds.
Don’t let that stop you from including more fruits and veggies in your diet, though. Even if they don’t directly help you lose weight, these foods still provide a number of health benefits.

A última frase do texto 1 “This report will inform the important debate taking place about sugar.” indica que o relatório do SACN 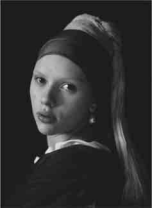 [1]  Girl with a Pearl Earring is a quiet movie about things not said, opportunities not taken,

potentials not realized, lips unkissed. All of these elements are guessed at by the filmmakers as they

regard a painting made in about 1665 by Johannes Vermeer. The painting shows a young woman

[4] looking at us over her left shoulder. She wears a simple blue headband, a modest smock and a pearl

earring. Her red lips are slightly parted. Is she smiling?

[7] model. You can hear that it was his daughter, a neighbor, a tradeswoman, but not his lover, because

Vermeer’s household was under the iron rule of his mother-in-law, who was vigilant as a hawk. The

painting has become as intriguing in its modest way as the Mona Lisa. The girl’s face turned toward

[10] us from centuries ago demands that we ask, “Who was she? What was she thinking? What was the artist

Tracy Chevalier’s novel speculating about the painting has now been filmed by Peter Webber,

[13] who cast Scarlett Johansson as the girl and Colin Firth as Vermeer. The girl’s name is Griet, according

to this story. She lives nearby and is sent by her blind father to work in Vermeer’s house.

Judge the item that follow according to the text above.

It is likely that Vermeer’s mother-in-law met the girl shown in the painting.

Coffee not only helps you feel full of beans, it might add years to your life as well, two major studies have shown. Scientists in Europe and the US have uncovered the clearest evidence yet that drinking coffee reduces the risk of death.

One study of more than half a million people from 10 European countries found that men who downed at least three cups of coffee a day were 18% less likely to die from any cause than non-coffee drinkers. Women drinking the same amount benefited less, but still experienced an 8% reduction in mortality over the period measured.

Similar results were reported by American scientists who conducted a separate investigation, recruiting 185855 participants from different ethnic backgrounds. Irrespective of ethnicity, people who drank two to three cups of coffee daily had an 18% reduced risk of death.

Each of the studies, both published in the journal Annals of Internal Medicine, showed no advantage from drinking either caffeinated or decaffeinated coffee. Experts believe the antioxidant plant compounds in coffee rather than caffeine are responsible for the life-extending effect. Previous research has suggested that drinking coffee can reduce the risk of heart disease, diabetes, liver disease, and some cancers.

Dr Marc Gunter, from the International Agency for Research on Cancer, who led the European study with colleagues from Imperial College London, said: “We found that higher coffee consumption was associated with a lower risk of death from any cause and specifically for circulatory diseases and digestive diseases. Importantly, these results were similar across all of the 10 European countries, with variable coffee drinking habits and customs. Our study also offers important insights into the possible mechanisms for the beneficial health effects of coffee.”

1. The newly renovated bathrooms at Bryant Park, which The Times has described as the “Tiffany’s of public restrooms,” reopened last month after a $280,000 makeover.

2. The internal investigator at Rikers Island was placed on modified duty in response to accusations that he had spied on city investigators.

3. A witness gives an account of what happened when a homeless man fell onto the subway tracks.