SANTIAGO DE CUBA – I’ve always been fairly skeptical about how much power one man can exercise, even if that man commands the attention of 1.2 billion Roman Catholics.

I understand that Pope John Paul II visited Poland in the 1970s and ‘80s and gave speeches so stirring that they helped launch the Solidarity opposition movement and lead to the collapse of communism in the country. And I know that popes throughout history have had influential moments.

But, really, how much can one man and one microphone do? How literally do people take his message? These were the questions that kept my mind busy when I left for Cuba last week to cover Pope Francis’ four-day trip. I was curious to see how much impact the words of this 78-year-old man can have on a population of 11 million. I’m becoming fairly familiar with Cuba. I’ve been to the island three times this year, five times overall, and grew up in southern Florida. My parents are Cubans who left the country in 1962. Cuba today continues to fascinate and dismay. It’s a place of beauty and jolting contradictions. The re-establishment of relations between the U.S. and Cuban governments, begun last December, continue to stir excitement and hope in Cubans, and changes are trickling in.

I followed Pope Francis from Havana to Santiago and heard him talk of reconciliation, love for mankind and the importance of family. I interviewed Cubans who glowed with the fervor of the faithful as they pledged their love for the Pope and promised to follow his message. But my question remained: What does all of this mean? How does it translate to actual change on the island?

To help me sort through this, I visited Father Jorge Catasus, a popular parish priest here who helped welcome the Pope to the city. We sat in the cool, cavernous back room of his 18th-century church, safe from the 37-degree heat outside. Catasus said “don't focus on any grand political or social changes stemming from the papal visit”. The most important changes, he said, come from within. That’s what Pope Francis offered as a first step, and that’s what Cubans across the island, in chants, cheers and tearful acceptance, agreed to abide by.

“The lives of men are decided in their hearts”, Catasus told me. “That’s where we’ll see the change”. This may not be 1980s Poland, and Solidarity may still not be anywhere in sight. But first things first. A change of heart can often lead to a world of good.

According to the text, Jorge Catasus is: 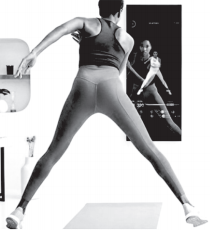 The latest innovation that’s changing the way
you break a sweat is likely to have even the most
internet-savvy millennials starry-eyed with workout
wonder.Today marks the release of the interactive
[5] gym, Mirror ($1,495, plus a $39 monthly subscription).
At first glance, the device looks like a sleek, no
frills reflective surface you might hang up to checkout
your leggings-sports bra combo before heading off to
spin class. Switch the device on however, and you’ll
[10] come face-to-face with a trainer who can lead you
through a full class of cardio, strength, yoga, Pilates,
barre, boxing, and stretch—all of which you can tailor
by time and skill-level to your personal fitness goals.
Visual feedback is at the center of the smart decor’s
[15] design. Not only can you see yourself and the trainer
as you perform each move in front of the device, but in
the live classes, the trainer can see you and offer you
feedback, like “Make sure you can see your toes in
chair pose!”
[20]    If you can’t catch one of the 50 or more real-time
sweat sessions offered per week, each category of
class is also available on-demand for midnight HIIT
(High Intensity Interval Training) sessions or spur of
the moment afternoon pick-me-ups.

Read text to do item.

The year is 2020, and it's 7;45 on a rainy Monday morning, and you are in your car on your way to work. You turn right, and you turn left. A few minutes later, you stop at a traffic light. When the light turns green and there are no other cars in the intersection, you continue on your way. Ten minutes later you get to work and stop reading the morning paper. Then, you get out of your car and you say, “Thank you!”, Your car replies, “You're welcome!”. This possible future may sound unreal, but in fact many car companies are already testing robotic cars, or driverless cars, on the roads today, although the cars don't speak very much yet.

In the 1980s, Germany and the United States tested the first driverless cars, and by 2020 companies such as Volvo, GM, Nissan and BMW plan to sell driverless cars. Driverless cars are not really 'driverless' - the drivers are computers that use radar, computer maps and other modem technology. They offer many advantages. Perhaps the most important of these is fewer deaths caused by road accidents. For example, in 1968 more than 53.000 people lost their lives in car accidents in the USA. This number has fallen to less than 33.000 but it's still à high number. In addition, people will spend less time stuck in traffic jams and there will be no need for people to have a driving license. One of the major disadvantages of this new technology, however, is the cost. It's not free. U$5.000 to U$10.000 is added to the price of the new car. Nevertheless, at some time in your life, you will probably be sitting in a robotic, .driverless car on your way to work or school. The future is almost here. Are you ready for it?

Read the extract from the text

What's the correct question referring to the underlined information?

A Free World-class Education for Anyone Anywhere

I didn't have a problem with Khan Academy site until very recently. For me, the problem is the way Khan Academy is being promoted. The way the media sees it as “revolutionizing education”. The way people with power and money view education as simply “sit-and-get”. If your philosophy of education is “sit-and-get”, i.e., teaching is telling and learning is listening, then Khan Academy is way more efficient than classroom lecturing. Khan Academy does it better. But TRUE progressive educators, TRUE education visionaries and revolutionaries don’t want to do these things better. We want to DO BETTER THINGS.

A Shoe Engineered to Boost Performance

Imagine a shoe that lets you run faster, pivot better and jump higher. That’s the idea behind the Futurecraft 4D, a new sneaker whose midsole can be expertly tailored to the needs of its wearers—not only in size and shape, but also in flexibility, impact type, cushioning and more. The key is the 3-D printing process, which enables the company to “look at every single square millimeter of a midsole and tune it from a performance standpoint,” says Al VanNoy, who headed the project. It would take weeks to make those modifications using traditional shoemaking methods. But the Futurecraft 4D midsoles can be printed in as little as two hours, meaning they could even be produced in stores. At least that’s a possibility for the future.

Based on the text, Futurecraft 4D 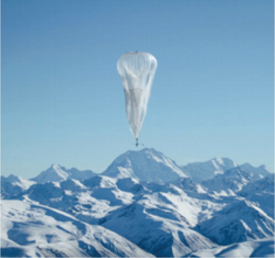 Within a year, Google is aiming to have a
continuous ring of high-altitude balloons in the
Southern Hemisphere capable of providing wireless
[10] Internet service to cell phones on the ground. That’s
according to Astro Teller, head of the Google X
lab, the company established with the purpose of
working on “moon shot” research projects.

Teller said that the balloon project, known as
[15] Project Loon, was on track to meet the goal of
demonstrating a practical way to get wireless
Internet access to billions of people who don’t have
it today, mostly in poor parts of the globe.

For that to work, Google would need a large fleet
[20] of balloons constantly circling the globe so that
people on the ground could always get a signal.
Teller said Google should soon have enough
balloons aloft to prove that the idea is workable.
“In the next year or so we should have a semipermanent
[25] ring of balloons somewhere in the
Southern Hemisphere,” he said.

Google first revealed the existence of Project Loon
in June 2013 and has tested Loon Balloons, as they
are known, in the U.S., New Zealand, and Brazil.

[30] The balloons fly at 60,000 feet and can stay in the
air for as long as 100 days, their electronics powered
by solar panels. Google’s balloons have now
traveled more than two million kilometers, said
Teller.

[40] Google’s trials in New Zealand and Brazil are being
conducted in partnership with local cellular
providers. Google isn’t currently in the Internet
service provider business—despite dabbling in
wired services in the U.S.—but Teller said Project
[45] Loon would generate profits if it worked out. “We
haven’t taken a dime of revenue, but if we can figure
out a way to take the Internet to five billion people,
that’s very valuable,” he said.