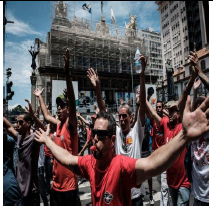 Brazil’s sickly economy is hemorrhaging thousands of jobs a day, States are scrambling to pay police officers and teachers, and money for subsidized meals is in such short supply that one legislator suggested that the poor could “eat every other day.” Still, not everyone is suffering. Civil servants in the judicial branch are enjoying a 41 percent raise. Legislators here in São Paulo, Brazil’s largest city, voted to increase their own salaries by more than 26 percent. And Congress, which is preparing to cut pension benefits around the country, is now allowing its members to retire with lifelong pensions after just two years in office.

Brazil is struggling to pull out of its worst economic crisis in decades, and President Michel Temer says the country needs to curb public spending to do so. Yet, it did not help his dismal approval ratings when he hosted a lavish taxpayerfunded banquet to persuade members of Congress to support his budget cuts, with 300 guests eating shrimp and filet mignon. Outside such rarefied circles, Mr. Temer’s austerity measures are igniting a fierce debate over how the richest and most powerful Brazilians are protecting their wealth and privileges at a time when much of the country is enduring a harrowing economic decline.

economic decline.
“This government talks about austerity for everyone, but of course forces the costs on society’s most vulnerable people,” said Giovana Santos Pereira, 25, a schoolteacher. “It’s ridiculous to the point of being tragic.” Much of the ire revolves around the centerpiece of Mr. Temer’s austerity drive: his success in persuading the scandal-ridden Congress to impose a cap on federal spending for the next 20 years.

Mr. Temer, who rose to power last year after supporting the impeachment of his predecessor, Dilma Rousseff, says the cap, which would limit the growth in spending to the rate of inflation, is needed to scale back ballooning budget deficits. Investors have applauded the measure as a turning point for Latin America’s largest economy. But critics are lashing out at the spending cap, saying it could harm the poor for decades to come, especially in areas like education. Philip Alston, the United Nations special rapporteur on extreme poverty and human rights, said the spending cap placed Brazil “in a socially retrogressive category all of its own.”

The debate is all the more caustic because Mr. Temer’s government is resisting calls to raise taxes on wealthy Brazilians, who still enjoy what some economists describe as one of the most generous tax systems for the rich among major economies. For instance, Brazilians remain exempt from paying any taxes at all on dividends from stock holdings, and they can easily use loopholes to significantly lower taxes on other sources of income.

Economists at the government’s Institute of Applied
Economic Research said in a 2016 study that a 15 percent tax on dividends could generate nearly $17 billion in revenue a year, but such proposals have failed to gain traction in a government that has shifted to the right. “The system is engineered to perpetuate inequality, and Temer is doubling down on bets that Brazil needs Greek-style austerity,” said Pedro Paulo Zahluth Bastos, an economist at the Universidade de Campinas, drawing parallels between Brazil’s multiyear slowdown and Greece’s seemingly interminable economic crisis.

Mr. Temer has not been a popular president, and his approval ratings stand at just 10 percent. But his supporters point out that his leftist predecessor, Ms. Rousseff, sought her own austerity measures before her ouster last year, and that his government has promised to maintain some widely popular antipoverty programs expanded by her party years ago.

Mr. Temer’s government says it is reversing the freespending ways of previous governments. Brazil’s economy shrank about 4 percent in 2016, when its political class was consumed by infighting over the impeachment. But last month, the finance minister, Henrique Meirelles claimed, “the recession has ended.”

Some promising signs of a recovery may be emerging. Foreign investment has increased and, after performing poorly, Brazil’s stock market was one of the best performing in the world in 2016, creating a windfall for the relatively prosperous Brazilians who put money into equities. Mr. Temer is especially bullish, predicting that the economy will grow 3 percent next year. But, the conditions on the streets of cities around Brazil tell a different story, reflecting devilishly complex structural challenges as millions of Brazilians fall into poverty.

Given this scenario, the Brazilian States are facing crippling strikes by public employees over unpaid or inadequate salaries. In the State of Espírito Santo, in Southeast Brazil, a police strike last month produced an anarchic week marked by looting and a surge in homicides.
(Adapted from: https://www.nytimes.com/2017/03/03/world/americas)

“[…] Mr. Temer has not been a popular president, and his approval ratings stand at just 10 percent. […]”

Assign the correct grammatical classes (underlined words) based on the order that they appear in the sentence above.

[1] A pilot from Northwest Airlines flight was less than pleased
with the food which was to be served on the flight.
He decided to find some better food, so he left his aeroplane,
and then left the airport to find food even though he had
[5] a plane to fly. The passengers were left to wait 90 minutes
until the pilot came back and when the pilot came back
he was fired on the spot for “abandoning his plane”.
(Adapted from www.flightglobal.com)

The ordinal form for the number ninety (line 05), in the text, is 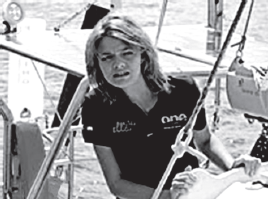 A 16-year-old Australian girl is nearly home after

sailing around the world. But she may not have sailed

far enough to get the record as the youngest person to

5    After more than six months at sea Jessica Watson

is in the final stretch of her epic voyage around the globe.

She’s hoping to reach Sydney Harbor later this month a

couple of days shy of her seventeenth birthday.

But although there’s no question that she’s

gone far enough to claim the record of being the youngest

person to sail solo non-stop and unassisted around the

The influential Sail World website has praised her heroic

“true circumnavigation”. To have achieved that, it says,

the teenager should have sailed much farther north into

the Atlantic to a point in line with France, rather than

simply crossing the Equator and then returning south.

done,” said the editor of the website “but it’s one thing to

be a hero and another to be a record holder. Had she

she could have made that boast.”

The correct sign for the number “three thousand seven hundred” (l. 23) is in